At the time of the Ebb 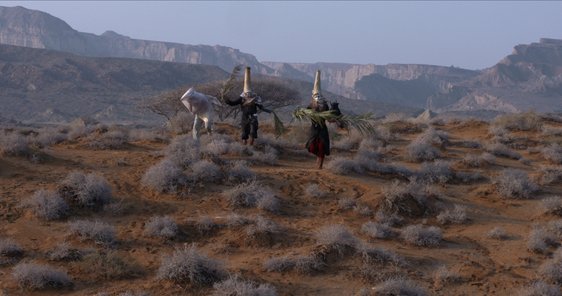 Alia Farid (b.1985) lives and works in Kuwait and Puerto Rico. She has a Bachelor of Fine Arts from la Escuela de Artes Plásticas (San Juan, Puerto Rico), a Master of Science in Visual Studies from the Visual Arts Program at MIT (Cambridge, Massachusetts), and a Master in Museum Studies and Critical Theory from the MACBA Independent Studies Program (Barcelona, Spain).

Farid has had recent solo exhibitions at Portikus, Frankfurt and Kunstinstituut Melly (formerly known as Witte de With Center for Contemporary Art), Rotterdam. Recent and upcoming group shows include participation in the 32nd Bienal de São Paulo, the 12th Gwangju Biennale, Sharjah Biennial 14, the 2nd Lahore Biennale, Theater of Operations: The Gulf Wars 1991-2001 at MoMA PS1, and Yokohama Triennale 2020. She has forthcoming solo exhibitions at Contemporary Art Museum St. Louis (CAMSTL), St. Louis in 2022 and The Power Plant Contemporary Art Gallery, Toronto in 2023. Through a combination of mostly film and sculpture, her work gives visibility to narratives that are obscured by hegemonic power.

At the time of the Ebb by Kuwaiti-Puerto Rican artist Alia Farid is the first exhibition at Vernacular new home in Santa Maria la Ribera.

The work was originally commissioned for Sharjah Biennial 14 that has been re-edited into a video installation for the Vernacular space. Shot in the Iranian island of Qeshm, it encompasses music, dance and performance during a traditional festival.

Farid’s practice draws on her personal, overlapping identities between the Caribbean and the Middle East. Instead of identifying herself transversely, she takes a critical position as part of the Global South, revealing the minority, the economically disadvantaged nation-states, and the concrete but abstract postcolonial fragments embedded in the contemporary. These issues are reflected in her recent essay films that address the social dimensions of common people’s autobiographies to unearth the multi-faceted theme of how power is distributed through past and present, geographically and politically.

‘My interest in filming in Qeshm was motivated by an urge to move beyond the prescribed parameters of what it means to inhabit a place, to transcend national and ideological borders, and insist on a diversity of experiences of contemporary life.’ Farid described. For the making of At the time of the Ebb, she crossed 100 nautical kilometers from the easternmost tip of the Arabian Peninsula to reach this neighboring, yet isolated community. The film documented the annual celebration of Nowruz Sayadeen, or Fisherman’s New Year, to investigate the impacts of modernization on both urban and natural environments. Conceptualizing a transnational territorial subjectivity, the video speaks to an alternative notion of the south anchored to the imagination of resistance.

* The quotation is extracted from the interview between Claire Tancons and Alia Farid on Vdrome: https://www.vdrome.org/alia-farid/

Commissioned by Sharjah Art Foundation on the occasion of Sharjah Biennial 14: Leaving the Echo Chamber, under the curatorial platform of Claire Tancons (Look for Me All Around You). Courtesy of the artist and Imane Farès (Paris).