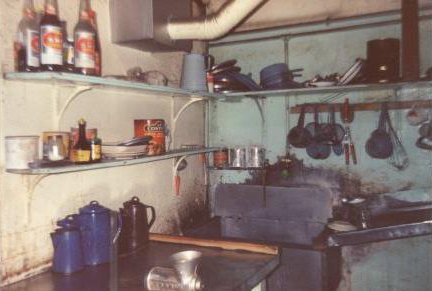 In 1932, it cost almost only fifteen cents for a cup of coffee and ten cents for a piece of bread in most cafés de chinos. The Chinese-operated cafes at that time, open around the clock, used to offer fast and cheap food to feed the low-income working-class and students in town. During the fifties and sixties, this type of cafe reached its peak with its recognisable Mexican cuisine made by adapting local recipes with touches of Chinese influence.

to the places of the past where life was loved

the absence of those dear things…”

Named after the lyrics from the song, Las simples cosas [The simple things], composed by César Isella and Armando Tejada and performed by Chavela Vargas, the title of this exhibition speaks to the shared experience of how places, where happiness once existed, inevitably change and become filled with absences over time, leaving only a reflection in the mirror of one's memories. Borrowing from these poetic lines, this significant reference stands as a testament to the nowadays declining cafés de chinos and the dilemma of cultural hybridisation.

The site-specific installation in the exhibition consists of a staged café de chino scenario. The landscape of these cafés becomes the focus in which the fragmented space reflects the transformation of collective memories in this temporal scene, absent of human beings. Within this context, the exhibition becomes a path that implicitly reveals both the observation and the understanding of the few cafés that continue to exist.

Observing people, their histories, their relationships and the social circumstances in which they live is an imperative part of the narrative in Working Hard’s projects. This may stem from their origin in Taiwan, where people have various complicated national identities, which has led to their curiosity about migration and the pursuit of vanishing histories under modernisation. Throughout the field and archival research about cafés de chinos in Mexico, Working Hard intends to unveil the soon-to-be-forgotten social landscapes beyond the well-known Mexican history narrative by conjuring the memories of a distinct, culturally hybridised immigrant history.

Working Hard is the Berlin based Taiwanese artist duo by She Wen-Ying and Kuo Po-Yu. Their practice focuses on a method of aesthetic practice in order to reconstruct an imaginative space via archival approaches. Abstracts every fragment and reflection of daily life and surroundings, Working Hard manipulates sounds, visions, smells and mediums, to examine the relations and extensions among these elements.

They usually applied the form of sculpture to anchor the issues of museum and archive in their previous creations. The works evolve along with their experience of working and living in different cities. From an individual angle, Working Hard observes and experiences the collective life of different cultures and societies. Within the combination of sound and vision, their work expresses the ‘transition’ and ‘exclusion’ of a culture which survives at the slit of the city.

Special thanks to the owners, family and staff of La Nacional, Café Allende and Café Manuel.

With the support of the Ministry of Culture of Taiwan.