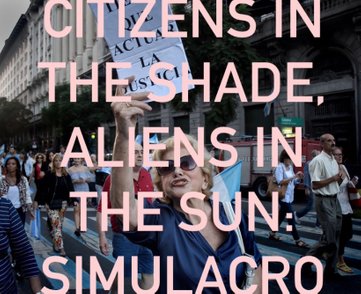 Citizens in the Shade, Aliens in the Sun brings together artists from different regions whose works are concerned with socio-political sensibilities echoed in their own environments. The exhibition emphasises artists’ explorations of narrative forms to describe marginal matters locally and globally, particularly in relation to issues of resistance, labour, exchange and property.

Presented in two stages, Citizens in the Shade, Aliens in the Sun, includes works by five artists from the Americas, Europe and Asia: Georgina Arizpe, Karolina Bregula, Musquiqui Chihying, Hou I-ting and Nicolas Poggi, whose subjects take on transnational relevance.

The title is referenced from a poetic prose written by Raqs Media for supercommunity in 2015. The text conveys a series of doubts on any definition of a fundamental freedom that may mask hidden costs. Departing from these same questions and in response to the current moment of planetary crisis, the exhibition manifests the two or three things we may know about marginalised peoples while acknowledging the inherent distance between their experiences and our own.

The first stage of Citizens in the Shade, Aliens in the Sun is Simulacro [Simulation], a site specific theatrical performance by Nicolas Poggi. The commissioned piece conducts as a demonstration of the artist’s position that ‘there are no limitations in choreography’. Poggi uses his body to interpret reportage images of protests from around the world, deciphered and instructed by others. This experiment in translating images into a performative act of re-signification in which the artist’s thoughts leads a choreography until the body resists as a physical metaphor from those involved in rebellions on the streets.

Nicolas Poggi is an artist, playwright and researcher and his practice encompasses choreography, theater and production of scenic projects. He is interested in collaborations in research and creation contexts. Staging is a practice where he congregates a set of aesthetic possibilities to transform and re-signify theatrical performance and dramaturgies.

Poggi studied dance, theater and fine arts at Patagonia University in Buenos Aires, Argentina. He founded Motos Ninja (Mex-Arg) Theater Production Company. His practice has been exhibited at OMNI, New York 2011, Chopo Museum, Mexico, City, Centre Cívic Barceloneta-In collaboration with Garner Salmon Festival, Barcelona, Spain. In 2019 his work was included at Venice Biennale, Edinburgh Festival, and Canal Madrid Theater. He made Un poyo rojo, a play that has been touring in Italy, Spain, USA, Canada, Brasil, Colombia and France. During 2018, Poggi was invited by Vernacular Institute to produce a site-specific commission for the exhibition Narratives of exchange / exchange of narratives in collaboration with artist Mandoka Furuhashi. He was invited to participate in Xavier LeRoy’s exhibition Retrospective in Jumex Museum. Poggi currently lives and works in Mexico and recently is developing audiovisual work to explore the new media.

The source of the image is from the newspaper LA NACIÓN (Arg).