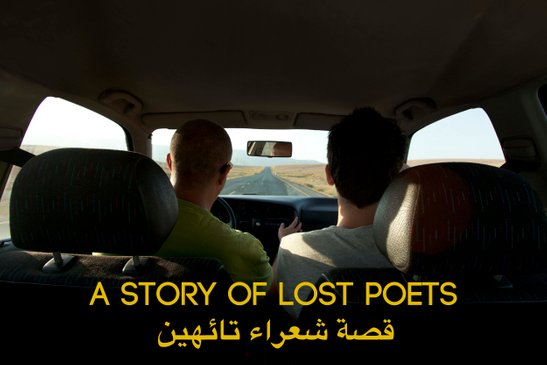 Basel Abbas and Ruanne Abou-Rahme, The Incidental Insurgents: The Part About the Bandits, 2012-2015

The total duration of the screening is over four hours with a 30 minute intermission.

Memory War is a film screening exploring the power and threat of remembrance. Curated by Los Angeles-based Asha Bukojemsky of Marathon Screenings, the four-day exhibition presents thirteen works that investigate the mediums and mechanisms that form memory—from images to fascist rhetoric—and the powers that resist them. In light of Russia’s invasion in Ukraine, past genocides, and the recent proliferation of memory laws in the United States, Memory War prompts viewers to consider how they remember, and for whom.

Probing historical revisionism, myth-making and revolutionary ideals, the first half of Memory War traces the blurry boundary between expectation and exploitation. A protest in the Donbas region of Ukraine turns into revolt (Oleksiy Radynski, People Who Came to Power), while a German childhood friend becomes a Kurdish martyr (Hito Steyerl, November). Image appropriation and consumption further reveal modes of transference when a Hans Christian Anderson fairy tale becomes a propagandistic tool for the Chinese communist party (Liu Shiyuan, For the Photos I Didn’t Take, For the Stories I Didn’t Read), and an anonymous five-hour online documentary is recombined into a surreal anti-war film (Dana Kavelina, Letter to a Turtledove). Here, memory itself becomes the counter-insurgence.

Prompting viewers to consider their own role as memory-makers, Memory War also investigates methods of retrieval and embodiment. An artist invokes a group of men, from Edward Said, Roberto Bolaño to Khosrow Golesorkhi, that inhabited their life during the artist’s move from Tehran to Los Angeles (Gelare Khoshgozaran, MEN OF MY DREAMS), while another conjures an unknown sister, killed during the Khmer Rouge (Vandy Rattana, MONOLOGUE). A 50-year-old recording of a grandmother learning the indigenous Pechanga language (Sky Hopinka, Kicking the Clouds) overlaps with ruminations of forced forgetting, whereas an archive featuring artifacts of a past life is built entirely from the memory of a reincarnated PLA soldier (Lawrence Abu Hamdan, Once Removed). Rebels, novelists, rituals and myth emerge throughout, as sites of erasure become projections of a potential future (Basel Abbas and Ruanne Abou-Rahme, And Yet my Mask is Powerful Part 1, and The Incidental Insurgents Part 1- through 3). Collapsing past and present, these narratives create a new kind of archive where stories of loss, belonging, and revolt inform a psychic resistance against the powers of erasure.

Together with the screening, the Vernacular Institute presents a multi-lingual reading room featuring materials contributed by the artists and curator that expand on concepts of memory, erasure, and forms of resistance. The reading room and screening are accompanied by an installation organized by Mexico City-based writer Su Wu, featuring bronze “Memoria” stools by design collective EWE Studio, cast from a collection of vernacular objects, and a rug of fallen jacaranda petals designed by Casa Ahorita for txt.ure, a design research project founded by Regina Pozo, former director of Archivo Diseñó y Arquitectura.

Basel Abbas and Ruanne Abou-Rahme work together across a range of sound, image, text, installation and performance practices. Their practice is engaged in the intersections between performativity, political imaginaries, the body and virtuality. Largely their approach has been one of sampling materials both existing and self-authored in the form of sound, image, text, objects and recasting them into altogether new ‘scripts’. The result is a practice that investigates the political, visceral, material possibilities of sound, image, text and site, taking on the form of multi-media installations and live sound/image performances.

Lawrence Abu Hamdan is an independent investigator or Private Ear. His investigations focus on sound and linguistics and have been used as evidence at the UK Asylum and Immigration Tribunal and as advocacy for organisations such as Amnesty International and Defence for Children International together with fellow researchers from Forensic Architecture.

Abu Hamdan received his PhD in 2017 from Goldsmiths College University of London and in 2021 completed a professorship at the Johannes Gutenberg University Mainz where he developed airpressure.info. He has exhibited at the 22nd Biennale of Sydney, 58th Venice Biennale, 11th Gwanju Biennale, 13th and 14th Sharjah Biennial, Witte De With, Rotterdam, Tate Modern Tanks, Chisenhale Gallery, Hammer Museum, and Portikus Frankfurt. For the 2019 Turner Prize Abu Hamdan, together with nominated artists Helen Cammock, Oscar Murillo and Tai Shani, formed a temporary collective in order to be jointly granted the award.

Sky Hopinka (Ho-Chunk Nation/Pechanga Band of Luiseño Indians) was born and raised in Ferndale, Washington and spent a number of years in Palm Springs and Riverside, CA, Portland, OR, and Milwaukee, WI. In Portland, he studied and taught chinuk wawa, a language indigenous to the Lower Columbia River Basin. His video, photo, and text work centers around personal positions of Indigenous homeland and landscape–designs of language as containers of culture expressed through personal and non-fictional forms of media.

Dana Kavelina (born 1995 in Melitopol, Ukraine) works with animation, video and installation to investigate the distance between historical and individual trauma, memory and misrepresentation. Her works thematize military violence and war from a gender perspective, focusing on the position of a victim as a political subject.

Her work has been exhibited at MHKA Museum of Contemporary Art Antwerp, Museum Folkwang Essen, Neue Galerie Graz, Closer Art Center, Kyiv, and screened at MoMA, e-flux, Castello di Rivoli and Haus der Kulturen der Welt, among others. In 2018 Kavelina received the Special Jury Prize at the Odessa International Film Festival and the Grand Prix of the KROK festival for her film “Mark Tulip, who spoke with flowers''. She is a graduate of the Department of Graphics at the National Technical University of Ukraine. Prior to the war, Kavelina was based in Kyiv and Lviv, Ukraine.

Gelare Khoshgozaran is an undisciplinary artist and writer whose work engages with the legacies of imperial violence. She uses film and video to explore narratives of belonging outside of the geographies and temporalities that have both unsettled our sense of home, and make our places of affinity uninhabitable.

Oleksiy Radynski is a filmmaker and writer based in Kyiv. His films have been screened at International Film Festival Rotterdam, Kurzfilmtage Oberhausen, Docudays IFF, the Institute of Contemporary Arts (London), and S A V V Y Contemporary (Berlin), among others, and have received a number of festival awards. After graduating from Kyiv-Mohyla Academy, he studied at the Home Workspace Program (Ashkal Alwan, Beirut). In 2008, he co founded Visual Culture Research Center, an initiative for art, knowledge, and politics in Kyiv.

His texts have been published in Proxy Politics: Power and Subversion in a Networked Age (Archive Books, 2017), Art and Theory of Post-1989 Central and East Europe: A Critical Anthology (MoMA, 2018), Being Together Precedes Being (Archive Books, 2019), and e-flux journal.

Vandy Rattana was born in Cambodia in the aftermath of the Khmer Rouge and having grown up in Phnom Penh, Rattana portrays episodes of historical violence through understated and tranquil images. He began his photography practice in 2005. His serial work employed a range of analog cameras and formats, straddling the line between strict photojournalism and artistic practice. His recent works mark a shift in philosophy surrounding the relationship between historiography and image making. For Vandy Rattana, photographs are now fictional constructions, abstract and poetic surfaces, histories of their own.

Since the photographic work and documentary Bomb ponds (2009), in which his photos of bomb craters articulate the psychological wounds of Cambodians who survived American carpet bombing between 1964 and 1973, Vandy Rattana has been scanning the idyllic Cambodian countryside with his viewfinders and revealing its traumatic past.

Liu Shiyuan was born in 1985 in Beijing and is now based in both Beijing and Copenhagen. Growing up in China during unprecedented technological advances, global commercialization, and popular culture assimilation, and later traveling and living between China, the U.S. and Europe, Liu adapted and cultivated an innate sensibility unique to the contemporary Chinese diaspora. Liu’s mixed media practice explores a complex 'identity confusion'—a lack of any specific confinement, wherein one’s lived experience and self-understanding derive from fluctuating components of rationality and mystery, reality, and fiction.

Hito Steyerl (born 1966 in Munich, Germany) is a filmmaker, visual artist, writer, and innovator of the essay documentary. Her prolific filmmaking and writing occupies a highly discursive position between the fields of art, philosophy and politics, constituting a deep exploration of late capitalism’s social, cultural and financial imaginaries. Her films and lectures have increasingly addressed the presentational context of art, while her writing has circulated widely through publication in both academic and art journals, often online.

Asha Bukojemsky is an independent curator and public programmer based in Los Angeles. Her projects foster public engagement and critical dialogue around the construction of identity, decolonization, and the politics of memory in a shifting geopolitical landscape. Since 2017 she has produced Marathon Screenings, a series of salon-style film & video presentations, as well as exhibitions and projects in collaboration with: JOAN; 18th Street Arts Center; Institute for Contemporary Art; Active Cultures; Richard Neutra VDL House (Los Angeles, CA); Oregon Contemporary; Chicken Coop Contemporary (Portland, OR); Syndicate (Vilnius, LT); Creative Migration (Bangkok, TH); among others. She has held positions at: Project X Foundation for Art & Criticism, Los Angeles; the Department of Cultural Affairs, Los Angeles; The Photographers’ Gallery, London; Cass Sculpture Foundation, West Sussex; DHC/Art Foundation for Contemporary Art (now PHI Foundation for Contemporary Art), Montreal;  among others. Bukojemsky graduated with an MLITT from University of Glasgow and a BFA from Concordia University, Montreal.