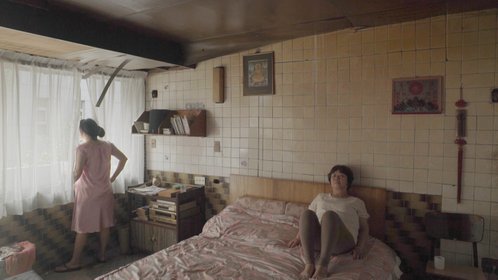 Dust is a story about two women living in an old district in Taipei earmarked for demolition. Since their building is due to be demolished soon, all the neighbours have already left. Yet, the women decide to stay in their flat. The protagonists spend time in the abandoned multi-storey building and observe through the window bulldozers working around.

The artist entered the building, cleaned up and furnished one chosen flat to turn it into a liveable space and used it as a film set. Then she invited the community to join the film production to act. In collaboration with Ms. Zou and Ms. Huang whose houses were bound for demolition but they were together with their neighbours fighting against the evictions in the district. One month after the film was done, Zou and Huang were forced to leave, then the building site was demolished completely. 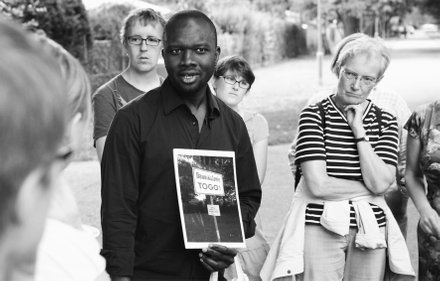 Café Togo looks at the efforts to change street names with colonial connotations in the so-called Afrikanisches Viertel (African Quarter) in Berlin-Wedding. Petersallee, Lüderitzstraße, and Nachtigalplatz bear the names of persons whose biographies are tainted by the blood of the victims of German colonialism. According to the law, streets that do not correspond to today’s understanding of democracy and human rights should be renamed.

Café Togo follows in its documental and fictional scenes the visions of the Black activist Abdel Amine Mohammed, who is intensively involved in processes of renaming streets with colonial connotations in Berlin both from the point of views of the Black community as well as civil society NGOs, whose activism seeks to implement change. He is working for a paradigm shift in the politics of state symbols: away from honoring colonial perpetrators, toward commemorating the victims and the resistance and freedom fighters of the German colonial regime. His goal: a multidimensional politics of memory within postcolonial perspectives. Abdel Amine Mohammed therefore wrote the story “With Colonial Love.” It is this story, along with a reference to the NS propaganda film Carl Peters (1941), which narrates the founding of German East Africa, that forms the basis for Café Togo.